The Dance – Part One

The Dance – Part One 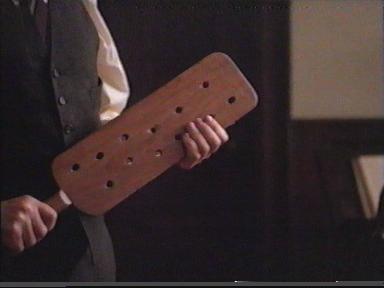 Mr. Berger was the biggest man most of the students at Midville High School had ever seen. His arms were wide. His chest was broad. His arms were built from years of body building.

He made a point of emphasizing his big size by growing a handle-bar mustache, and speaking very loudly all the time.

He taught biology at the High School, and most found his course to be fairly non-challenging.

However, disobedience or rule breaking of any kind in his class was a event that got whispered about for weeks around the school. The reason was, that Mr. Berger was the only teacher at the High School who still utilized corporal punishment.

Spankings were regularly handed out by the principals and teachers at the elementary schools. But now, in the mid-1980s most High School teachers had walked away from the practice.

Some disapproved of spanking students at all. Others felt that High School was too old for this kind of “childish punishment” and that High School Students were old enough to be reasoned with, and punished by other means.

But Mr. Berger did not buy into this kind of thinking. With his body builder proportions, and his angry loud voice, the only thing that could possibly make him more intimidating was the big, extremely heavy, wooden board that sat on his desk.

With his huge build, his loud voice, and his anger, on some occasions he seemed like an angry, wild beast, or a kind of biology teaching King Kong.

So, it was almost perfect that Emily would walk into his life, and make everything more complicated.

Emily was a quite girl. She didn’t wear the expensive fashionable clothes that made her one of the “popular” girls. However, she was certainly not unattractive. Though she spoke very little, she always a sly smile on her face.

She said very little, but many looked on her, wondering what was behind her sly smile and her distant eyes.

Until the incident with Mr. Berger, most people knew very little about her. She had played Volleyball in Middle School, but not liked it. She was on and off of the honor roll that was printed in the newspaper.

She didn’t say much. She wasn’t a rebel. She wasn’t popular and part of the town’s culture. She just kind of fell through the cracks.

However, when the year started, and what came to look like a dance began, everyone knew her name.

When Emily entered Mr. Berger’s class on the first day of school in 1985, she carried with her, like all the other students, a notebook.

But Emily’s notebook contained some items not inside others notebooks. The front inside cover of the notebook marked “biology” had pasted inside of it, a photograph from the previous years yearbook. It was a picture Mr. Berger. It was his staff picture.

If one turned a few more of the pages, one could find cut outs from the local, small town newspapers, stapled in it.

Images of him with the shot putters from the track team who he coached after a big win were among them.

A small editorial in the local paper: “Good Work Mr. Berger”, that had come out an entire six years prior, was found among the notes as well.

What did this mean?

Emily had this section highlighted with bright yellow magic marker:

“Mr. Berger offers spiritual guidance to his students, often giving good advice on the difficult choices young people face in the modern time… he also is the last of the Midville High School teachers to continue the use of corporal punishment which he considers to be the biblically sanctioned form of school discipline.”

Emily had a plan when she entered his classroom. She would not be foolish and rush it. But her plan, which no one would expect or see coming, would soon be enacted.

She couldn’t be the first one. This was a rule she had laid out for herself in the original plan. If she were the first one, it would be to obvious what she was doing. Somebody might figure it out.

She had to let some other student get paddled first.

So, on that first day, as Mr. Berger thundered off the rules of his 6th period biology class, at the end of the school day, Emily waited.

“If you choose not to your homework…” Mr. Wressler thundered, almost waving his arms “I’m not just going to give a zero, I’m gonna light your butt up!”

“Also, girls, I know you all like to talk… but not in my class. You’re hear to learn. If you decide this is social hour, I’ll take you out in the hall and show you who’s time this is. This is my time. Don’t think that just because you are a girl I won’t keep order in my class!”

Yes, Emily was so tempted to start talking right then. It would be sure to work, as he just said the very rule she would break. It would be outright defiance.

But she reminded herself, “I can’t be the first.”

So, she continued sitting silently, like the good, yet mysterious girl she was.

No one had received the paddle on the first day. Emily was disappointed, greatly. She left the class still excited, with her expectations disappointed.

The tragic event of good student behavior continued until Friday.

On Friday, Richie Vallens, a second string football quarter-back, had forgotten to do his homework assignment.

Emily smiled, because the trap was set now, she could snap it into action immediately.

“No, Mr. Berger, I just forgot.” He said, his voice regressing to panic, as tried to hide his terror.

“Forgot, huh?” Mr. Berger said, in his overly manly and threatening low voice. “Well, perhaps I can do something that can help you not forget.”

“You don’t need to…” Richie squeaked as his voice trailed up into a high pitched, boyish tone of terror. “I won’t forget it again… honest I won’t. It was just a big mistake.”

Berger, despite his neccessary put on anger, could not help but let his mouth curve upward into a big smile beneath his bar mustache.

“Not good enough…” He said. “You’re going to have to meet the Paddle! You’ll be the first one this year!”

The class was silent.

“Everybody listen.” He said. “You’ll hear the sound of what happens to slackers and screw offs in my class. Meet me out in the hall Richie.”

Richie stepped out into the hall.

Mr. Berger pulled the big, almost overly large wooden paddle, with numerous holes drilled into it from his desk.

He then followed, slamming the classroom door shut, in order to help maintain his fake anger and conceal his thrill in doing his “educator’s duty.”

Some of the boys mouthed “fag” or “sissy” to eachother, not sympathizing with their fellow student, who they assumed was not as “tough” as they were.

Richie returned, not crying, but drenched in sweat and his face nearly as red his buttocks was, underneath his blue jeans.

Now, it was time to begin, Emily thought. But then she looked up at the clock. Class was over in five minutes. That just wasn’t enough time.

She sat there, frustrated, and breathed in and out. She looked across the room at Richie, and could see he was doing the same, with a look of shock on his face.

The bell finally rang, and with disappointment, she walked out of the room.

However, before she left school for the weekend, she took the worksheet they were assigned for the weekend out her specially decorated folder. She ripped it up, and dropped in one of the big trash barrels that the janitors had already pulled out of the classrooms as students filed out of class.

“No backing out now.” She whispered to herself, before walking off the campus to enjoy her weekend.